CBD is a naturally-occurring compound of the cannabis sativa industrial hemp plant. There are over one hundred compounds found in hemp, known as cannabinoids. CBD is one of the most abundant cannabinoids found in the hemp plant that has significant medical benefits but does not have the euphoric effect like that found in the THC compound. CBD can counteract the euphoric effects of THC. Known in scientific terms as Cannabidiol, CBD or Hemp Extract, CBD is an antipsychotic compound that has demonstrated in multiple studies to seemingly prevent the breakdown of specific chemicals in the brain affecting mood, pain, and mental function.

How Does CBD Work? The Endocannabinoid System: Expand

To understand the human endocannabinoid system, it’s helpful to know a little about one of the most fundamental concepts in biology: homeostasis. Homeostasis is the concept that most biological systems are actively regulated to maintain conditions within a narrow range. Our body doesn’t want its temperature to be too hot or too cold, blood sugar levels too high or too low, and so on. Conditions need to be just right for our cells to maintain optimum performance.

Research on Cannabis effects led directly to the discovery of an unknown biochemical communication system in the human body called the Endocannabinoid System. Our body’s endocannabinoid system has found to be directly involved in the process that keeps our bodies balanced day to day which plays a crucial role in regulating our everyday experiences including appetite, pain sensation, mood, memory, immune system functions, and inflammation control. The body creates its own cannabinoids, called endocannabinoids, that support many physiological systems in the human brain and body. Cannabinoids are chemical compounds that trigger cannabinoid and other receptors.

Endocannabinoids and their receptors are found throughout the body: in the brain, organs, connective tissues, glands, and immune cells. In each tissue, the cannabinoid system performs different tasks, but the goal is always the same: homeostasis, the maintenance of a stable internal environment despite fluctuations in the external environment.

Can CBD/Hemp Extract Get You High? Expand

No. Industrial Hemp oil contains CBD, the non-psychoactive compounds of the cannabis plant. With the increasing amount of research being done on CBD, we are better able to understand how it reacts with the body. We are also able to isolate the CBD to achieve maximum results with minimum side effects. Often confused with the sister Cannabis Sativa plant, Medical Cannabis, CBD oil does not contain the psychoactive properties of THC found in the Medical Cannabis plant. Which means it does not get you high. In order to understand why we must look at the chemical makeup of CBD.

The two sub-types of cannabinoid receptors are CB1 and CB2. CBD does not interact directly with these receptors; instead, it acts inhibits the enzyme that activates the receptors. This partially explains why CBD is not intoxicating. In addition, CBD inhibits the interaction of THC with the receptors, which reduces the psychoactive effects of THC.

Not only does CBD not get you high, but it is known to work against the THC that creates a high.

While the legal cannabis industry continues to grow, businesses have sought to create synthetic cannabinoids. Whether it’s an “illegal” and “designer” or a prescription endorsed by the FDA, synthetic cannabinoids are popping up everywhere. One synthetic cannabinoid, known commonly as “spice” is illegal for good reasons. After becoming illegal in 2014, the number of calls to poison control increased by 330%. The use of “spice” led to numerous deaths and other health complications.

Will I Fail A Drug Test? Expand

We recommend individuals who are subject to a drug test, should avoid all full spectrum hemp-derived products to avoid any issues with the testing. Because hemp extract (CBD) products do contain a trace amount of THC (no more than 0.3 percent), there is always a possibility you could fail a drug test. While hemp-derived CBD products will not cause any feelings of intoxication (get you “high”) full spectrum products are not completely THC free. If concern about drug testing, Bloem isolate hemp extract products are THC free. There are some testing facilities that check for a spectrum of cannabinoids and could trigger a positive drug test. By law, you are allowed to ask the facility what cannabinoids they test for.

CBD Isolate vs Full/Broad Spectrum CBD: Expand
CBD-isolate is the pure, isolated CBD compound, all by itself. It exists as a white powder and contains no other active compounds. This also means it contains ZERO flavor making it more palatable for many consumers. Isolate is typically the CBD oil product of choice for those who get drug tested or are sensitive to other cannabinoids such as THC. Products labeled as Isolate will generally be highlighted as being 99+% pure CBD.
Full-spectrum oil contains other active plant compounds in addition to the CBD. This includes other cannabinoids such as CBN, CBL, and CBCVA, as well as cannabis terpenes like pinene and limonene. With Full Spectrum CBD oil products, you have the advantage of something called the “Entourage Effect,” where all the cannabinoids and terpenes are working together in synergy, something that Isolate products will lack.
Our Bloem product line utilizes the benefits of both the CBD-isolate and full spectrum CBD to provide a range of products and benefits to our customers.
CBD/Hemp Extract Benefits: Expand

Cannabidiol (CBD) has been shown in a patent by the US National Institutes of Health to have significant antioxidant and neuroprotective properties, suggesting that it could be a potential treatment for neurological disorders. While Cannabidiol is not yet FDA approved for any condition, many studies have shown promising results for a variety of indications.

Cannabinoids have been found to have antioxidant properties, unrelated to NMDA receptor antagonism. This new found property makes cannabinoids useful in the treatment and prophylaxis of wide variety of oxidation associated diseases, such as ischemic, age-related, inflammatory and autoimmune diseases. The cannabinoids are found to have particular responses as neuroprotectants, for example in limiting neurological damage following ischemic insults, such as stroke and trauma, or in the treatment of neurodegenerative diseases, such as Alzheimer's disease, Parkinson's disease and HIV dementia.

Since CBD oil has not been FDA approved as a treatment or cure for any disease, we do not make any medical claims related to Industrial Hemp CBD oil. Many reputable clinical publications have published their findings on CBD, and we recommend that you do your own research on CBD.

How Much CBD Should I Take? Expand
No two bodies are alike plus considering the endless amounts, of variables that are at play this makes for a difficult question to answer. For instance, here’s just a small list of some of the things that might affect how many mg of CBD it will take for you personally to start noticing therapeutic effects:
The ideal dose and frequency can differ depending on the person and illness. We have provided a general cannabidiol dosage guide which you can find out how many milligrams you should take. Click here to see our Dosage Page. We always recommend that you consult a medical professional before starting any hemp extract product.
Where Is Your Hemp Sourced From? Expand

At Bloem, we proudly support USA based businesses and farmers. We believe that you should bloom where you are planted, therefore we work exclusively with USA farmers across our beautiful country to source the best-grown hemp in the United States. We work from soil to oil to bring our customers consistent, pure, quality hemp extract products.

Yes, all products distributed by Bloem are laboratory tested in multiple facilities by third parties to ensure purity, safety, and consistency. We retain the test results to prove it. Bloem strives to be consistent and to provide only the highest quality, trusted and effective Industrial Hemp CBD/Extract products on the market. That is why we have our CBD frequently lab tested by multiple independent parties.

What are Medium-Chain Triglycerides? Expand

Medium-Chain Triglycerides (MCT), are special types of saturated fats that are derived from coconut and palm oils. The “medium” refers to the length of their chemical structure: all fats are made up of strings of carbon and hydrogen. Short-chain fats have fewer than 6 carbons. Long-chain fats have 13 to 21. Medium-chain fats are in the middle, with 6 to 12. Unlike long-chain triglycerides, MCTs are used by the body quickly and easily. Because LCTs are larger and more difficult to use, they are naturally stored in the body. MCTs are more easily absorbed and used by the body thanks to their smaller size.

There are three separate fatty acids classified as medium-chain triglycerides you’ll see them referred to in all three ways:

MCT oil can be a mixture of one or more of these types of medium chain fatty acids (MCFAs) and are typically extracted from coconut or palm oil. Both of which are rich, natural sources. MCFAs are also found in human breast milk, goat milk, cheese, butter, and other types of dairy. Whether consumed in the whole form from coconut or palm oil in a concentrated MCT form, these triglycerides have several benefits.

For anyone concerned about blood sugar levels, inflammation, or burning fat; MCT provides a host of benefits. MCTs are very easy for the body to break down and use as energy. MCT helps to shift the metabolism away from glycolysis (burning sugar) and more towards fatty-acid metabolism/fat burning.

Instead of being metabolized through the digestion process like other fats are, MCTs are taken straight to the liver where they act very similar to carbohydrates. This provides almost instant–and well sustained–energy. But it’s not just the energy you get that’s interesting....

The Unique Structure of MCT Makes It Beneficial In Several Ways:

How Is MCT Metabolized? Expand
MCTs differ in their digestion and absorption in that they do not require incorporation into a chylomicron. Instead, MCTs are absorbed into enterocytes as free fatty acids where they pass into the portal system and are delivered to the liver. MCTs avoid circulation and so can undergo oxidation in the liver producing an instant source of energy for liver cells. The absorption and metabolism of these fatty acids are important in human nutrition because the different pathways have implications for body weight maintenance, fat storage, and energy production. Long Chain Triglycerides are passed into the circulatory system which allows them to be deposited into adipose tissue. 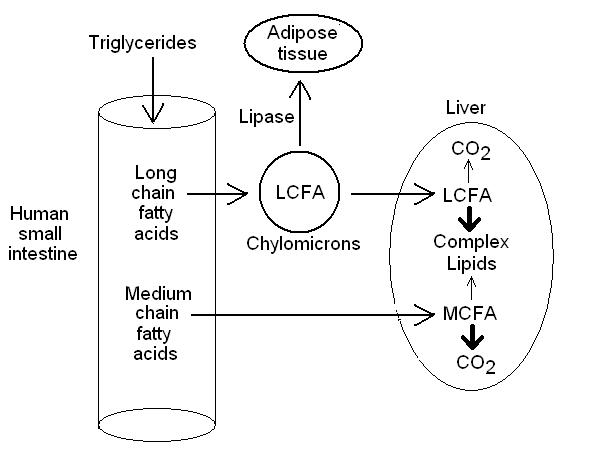 MCTs have been shown to have positive impact of weight loss.

Research shows there are several ways that MCTs may help with weight loss, including:

The use of medium-chain triglycerides and MCT oil has been associated with several other health benefits.

Dosage and Side Effects: Expand
MCT oil is considered safe for most people. It is not clear what dose is needed to obtain potential health benefits, but suggestions are1 to 3 tablespoons daily.
MCT oils are known to cause gastrointestinal symptoms. When taking MCTs, you may experience diarrhea, nausea, abdominal cramps, bloating, belching.
You can help minimize side effects by starting off taking MCT oils slowly. This helps your body get used to them so you can gradually build up to your preferred dosage. Taking the oils with food can also help reduce gastrointestinal symptoms. A high-fat diet could potentially aggravate MCTs side effects.